I don’t know if I’ve mentioned it, but I’ve been back to using Ubuntu for a couple of months. I came back to Linux on Intrepid Ibex (well just barely before), upgraded to Jaunty Jackalope then migrated to openSUSE. openSUSE was lots of fun, but I found some general things that I felt Ubuntu was doing better and though openSUSE has a lot to offer, I eventually switched back to Ubuntu (Lucid Lynx). I should note that during my openSUSE experience I upgraded to a workstation instead of a MacBook Pro. I’m not saying that Linux didn’t work on the MBP, but it works much better on this workstation which HP offers with Linux as an option.

Anyway, I had a fun time upgrading earlier today. Sunday is a busy day for me with numerous family and Church obligations that have to come first. Luckily, the upgrade could hardly have been easier. Now first keep in mind that an upgrade of this type from Apple or Microsoft for an operating system would cost me over $100. Price for my upgrade? Zero.

Because I had 10.04 installed previously my upgrade manager was set to only look for upgrades to other Long Term Support (LTS) versions. To explain, let me quote Wikipedia:

Canonical releases new versions of Ubuntu every six months and supports Ubuntu for eighteen months by providing security fixes, patches to critical bugs and minor updates to programs. LTS (Long Term Support) versions, which are released every two years, are supported for three years on the desktop and five years for servers.

This was easy to change. Click the ‘Settings’ button and under ‘Look for upgrades:’ choose ‘Normal releases’. 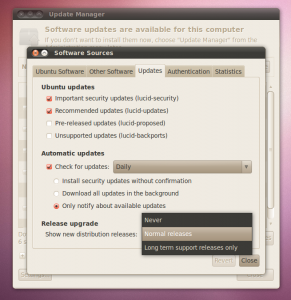 Now when you check for updates, Update Manager has a prompt to let you optionally upgrade to the new version of Ubuntu. Go!

A program kicks off and downloads everything you need and installs it. You reboot and you’re done. Generally, I prefer clean installs where you wipe everything and reinstall. Windows and even Mac OS X users would be insane to do an upgrade. But Ubuntu has always done well with in-place upgrades and I’ve grown to trust it.