I Want Nepomuk Turned On

We all make mistakes sometimes, even me. And when it comes to computers I sometimes make messes that I then have to clean up. This is one of those times.

Do a search for Nepomuk and mostly you find things like “Help! Nepomuk is eating all of my CPU” or “How do I get rid of Nepomuk?”. Now I know that some KDE 4 underpinnings like Akonadi and Nepomuk (man we have exotic names) have had stability issues. But at this point they’re fairly stable and I’m guessing they’re even better in KDE 4.10 which will be released in a few weeks.

I ran into trouble with Nepomuk in the last week or so. The indexing process, virtuoso-t, was just on all the time. I had made so many drastic filesystem and email changes that I suspect that the file repository was having trouble adjusting. But unlike many out there, rather than turn off Nepomuk because something’s not quite right, I want to figure it out to keep it on to take advantage of what it offers.

So I decided to wipe out my Nepomuk data by deleting the $KDEHOME/share/apps/nepomuk directory (as suggested here). I also cleared Akonadi db_data but I don’t think I needed to do that, in hindsight. I of course did this while I was logged out- I don’t know what would happen if you tried to mess with Akonadi and Nepomuk while they were running- probably a bad idea.

So I logged in and sure enough- 0 files in my repository now. Unfortunately, Nepomuk didn’t automatically start re-indexing my files as I assumed it would. Finally, I got it going by unchecking all folders from the Customize indexed folders dialog (System Settings > Desktop Search > Desktop Query), clicking ‘Apply’ and then going back in and checking the needed folders and clicking ‘Apply’ again. 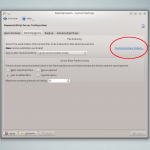 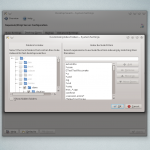 Immediately Nepomuk was off to the races, indexing my files. This time I had unchecked ‘Index my emails’ so it would first focus on the files.

I also noticed that there’s a setting (Advanced Settings tab) to devote more RAM to the indexing process (virtuoso-t) which supposedly boosts its performance. A while back I maxed out my motherboard and installed 16GB of RAM. The system may be dated, but it’s got plenty of RAM now. With that plentiful amount (and let’s face it- most of you have more RAM than you need too), I gave virtuoso-t as  much RAM as the slider allowed. Hopefully it appreciates that sacrifice and behaves.

My files are indexed again. So far, so good.